At Full Sail University, an annual celebration lands somewhere at the crossroads of a college homecoming, tech conference, red-carpet awards ceremony, and a career fair, and it's called Hall of Fame Week.

Since 2009, Full Sail has honored select graduates for their achievements in their field and their dedication to giving back with a ceremony inducting them into the university's Hall of Fame. These alumni have not only done impressive things in their careers, but they've also brought back their wealth of knowledge and experience to contribute to the Full Sail community. Past Hall of Fame inductees include Grammy, Oscar, and Emmy winners; entrepreneurs and business owners; tech innovators; and live production legends.

The highly produced Hall of Fame ceremony shows off the creative skills behind the university with contributions from staff and students alike. It has also featured congratulatory messages for Hall of Fame inductees from celebrities they've worked with, like Peter Jackson, Ringo Starr, Neil Portnow, Peter Frampton, Will.i.am, Rob Reiner, Pharrell, and Metallica. 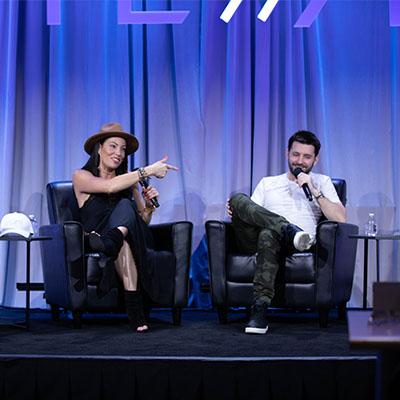 Beyond the induction ceremony, Hall of Fame Week is also about providing opportunities for students to network with alumni and employers in their field. Students can attend both in-person and virtual workshops, panels, and networking events.

Full Sail has partnered with companies like LinkedIn, WWE, Sony, Adobe, Sennheiser, Orlando Health, Facebook, and Google, as well as major gaming studios, to put on career fairs where students can share their resumes and portfolios with prospective employers. 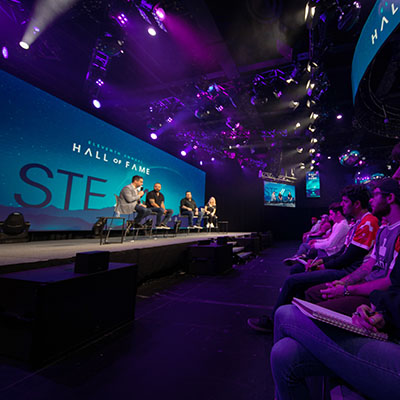 Throughout the week, students fill their schedules with education sessions to learn directly from professionals in their industry. Alumni from companies like Google, HBO, and NASA have shared their knowledge on panels, held student portfolio reviews, and participated in Q&A sessions both on campus and virtually.

Recently, several Full Sail alumni have contributed to virtual Hall of Fame Sessions via Zoom to provide insight into their expertise and advise students on their career paths.

And with so many deep connections to the entertainment world, the university has also had their fair share of impressive special guest speakers. They've hosted notable guests like Nelly Furtado, Anthony Hamilton, Timbaland, Run of Run DMC, Triple H, Mutemath, and many others.

The university also uses Hall of Fame Week as an opportunity to unveil new facilities on campus with ribbon-cutting ceremonies. That includes their on-campus Smart Lab, a tech lab full of smart devices, touch screens, and interconnected technology for students to experiment with and demonstrate tech solutions.

During Hall of Fame X, they also introduced the Full Sail University Orlando Health Fortress, the school's massive esports arena, which was lauded by the mayors of both Winter Park and Orlando as a beacon for the tech and esports industries in Central Florida.

Inside The Fortress, companies like Apple, Canon, Nokia, RED Digital, and Dolby Laboratories gather for the Tech Expo during Hall of Fame Week. These vendors come to showcase the latest in tech trends and interactive experiences with presentations and product demonstrations.

Most of all, Hall of Fame Week is a celebration for Full Sail students. The campus-wide Creative Experience puts on activities like cosplay contests, silent discos, mural painting, and T-shirt printing. Student clubs also host things like gaming tournaments, scavenger hunts, and karaoke.

And after the induction ceremony, Hall of Fame turns into a campus-wide block party with food, music, entertainment, and a chance for everyone to let loose after an action-packed week.

In 1998, Full Sail University was one of the earliest schools to offer a show production...