It’s audition season, and that can be an exciting and nerve-wracking time. Today, we’re talking with three-time Academy Award-winning Jana Sue Memel from the Academy of Art School of Motion Picture & Television and the School of Writing for Film, Television & Digital Media— who will be sharing some audition tips to help you succeed in a competitive industry.

What makes an acting audition stand out from the rest?

JM: A stand out acting audition starts when the performer walks in the room. It is at this point that you (the people casting the role) unknowingly make subtle assessments about the performer. Not based as much on their looks (although that is a factor) meaning how like the image of the character in your head that they are auditioning to play they resemble, but more on their general "energy." Are they upbeat, do they make eye contact, do they carry themselves with assurance, have they dressed appropriately either for the role or for an audition? All of these little visual clues influence how you judge their performance as they frame your state of mind and receptivity. If you "like the performer," immediately they have a leg up on their competition for the role. In film auditions, there is usually a few minutes of chit-chat before the actor is asked to read. This is a time when a performer can really lock down their audience's connection with them. The performer's ease in this situation, their ability to listen and converse is also key.

The next thing that makes for a stand-out audition is the performer's take on the role. Have they done the work prior to the audition to give their reading something more than a superficial interpretation of the words? Have they made a choice that reflects subtext? Are they either off-book, or able to make eye contact while on book?

Finally, how do they respond to adjustments? Unless an actor can change their performance from reading to reading even if I like their initial choices I generally will not hire them. If an actor cannot adjust based on a director's vision of a role and then continue to adjust as a director plays with a scene, then they are not going to have a career or stand out in an audition.

What is one (or two) common audition mistakes you commonly see?

JM: First mistake: no interpretation of the role - a flat rendition of the lines.

Second mistake: no change based on feedback from the director, producer or casting director.

Both of these are a sure way to lose a part.

Any advice on headshots?

JM: There is no one headshot that fits all situations. This is a fundamental rule. You should have a variety of headshots available to send in for different roles. All should be shot against a neutral background. For each different pose think carefully about what you are projecting with your wardrobe, hair, and facial expressions. Each headshot should show you as qualified to play something different. In the early days of your career being brought in for an audition will largely be based on your headshot. First, a producer, director or casting director will look at your headshot and decide if you "appear," right for the role they are filling. Then they will look at your reel, so to get your reel watched, your headshot must be excellent.

What is something that makes an undergrad resume stand out?

JM: Obviously an undergraduate resume stands out if the student has worked professionally and that should be the first thing that appears on their resume even if the work is in commercials and is non-Sag.

Secondly, for me, it is important that if a student is auditioning for on-screen work that they have been in several student films in featured or leading roles. The acting requirements of on-camera work are different than on stage. When I am looking to hire someone professionally, I am not looking to teach them how to act on camera, I am looking to work with them as professional actors.

Take these tips and audition for the Academy of Art MA or MFA Acting programs at the 2020 URTA Satellite Auditions!

Submit a free interest form today, and come audition at the 2020 URTAs! 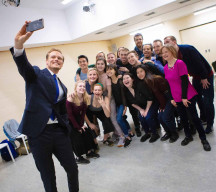 Learn from the Best at RCS

(pictured above: Actor Sam Heughan with RCS students)A key element of life at the Royal...

Acceptd is excited to announce a new partnership with the luxury fashion brand, Gucci, and... 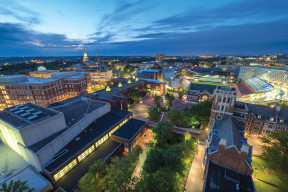 Hone Your Skills with World Renowned Faculty at CCM

The University of Cincinnati College-Conservatory of Music (CCM) has been ground zero for...